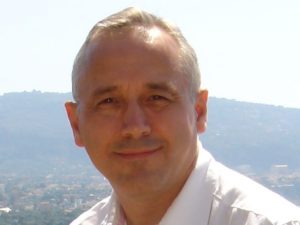 My Wife Suzanne and I are originally from the United Kingdom. We came to the USA in 2010 as I was employed for a firm in Norcross on a 3-month contract. Not only are we still here ten years later, now living in Clarkesville, but in 2019 we have the immense privilege of becoming US Citizens for which we are extremely grateful.

I’ve had a mixed career; from school I joined the British Royal Navy with the intent of seeing the world. Unfortunately, the RN had other ideas and so I was sent to Scotland where I served 23 years on nuclear submarines. During that time, I availed myself of the educational opportunities offered and so left the RN, in 1999, with an Associate degree in Electronics and Electrical Engineering, a B.Sc. (Hon) Politics and Economics, and an M.Sc. I.T. and Management. (well you must do something while underwater for 3 months). Having been Honorably discharged from the RN I moved into Engineering Management where I worked on many projects which culminated with coming to working in the USA. In 2015 Suzanne and I decided to move to North Georgia and, since we were both too young to retire, I decided to retrain as a Realtor, eventually working for ALCO Realty, and Suzanne opened a Needlecraft and Gift store (Tudor Rose) in Clarkesville.